Borun the Pelican and Tuk the Musk Duck

The Dreamtime Ancestors of the Gunaikurnai. 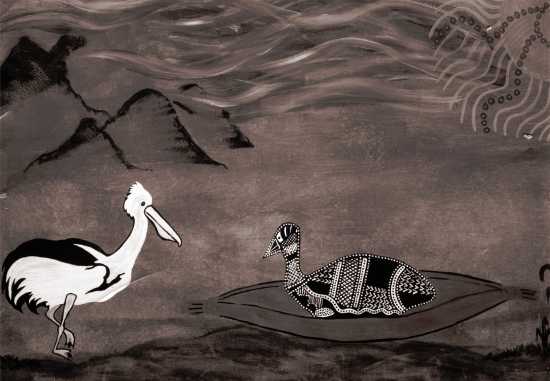 The First Aboriginal Man and Women

A long time ago the first people were animals and the first Gunaikurnai Man was Borun (a Pelican).

Borun came a long, long way from the hills, looking for a place to live, carrying a bark canoe on his head. He's walking, walking and he hears tapping! Looks here, looks there, nothing! Where's the tap, tap coming from? He comes to a river puts down the canoe and what's inside? Tuk (a Musk duck). Borun sees Tuk, likes Tuk and they start the Gunaikurnai people.