Axes and fish hooks. Meetings past and present.

On the bluff high above a bend in the Dooyeedang (Avon River) axe heads were sharpened on the sandstone grinding stones. The deep grooves, which may still be easily observed, are a reminder of the ancestors who have visited this place for centuries.

When the stones were ready they were bound with kangaroo sinew to a handle of supple wood which had been treated in a fire to harden it. 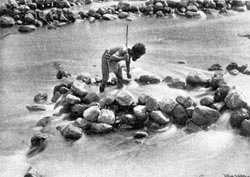 Down by the river people fished for eels, bream, flathead and prawns which were an important part of the food supply.  Spears, nets and hooks made from kangaroo bone were used to catch the fish.

The bluff above the Dooyeedang was a major campsite and meeting place for the Gunaikurnai people who have lived in this region for thousands of years.

It provided an ideal vantage point from which to look out for fish, animals or other groups of people.  As well as being a source of food, the Dooyeedang was a major transport route for the Gunaikurnai people. Bark canoes were used for fishing and travelling up and down the river between the mountains and the lakes.

This was a well sheltered campsite, close to the river and fertile river flats that supplied plenty of good food and water  and would have allowed large gatherings of clans from the Gunaikurnai nation to meet for feasting, corroborees and other ceremonies.

Migration routes along the river and along the present day highway passed close to this camp.

Around the turn of the century, this area was used for less happy meetings.

In 1886 all ‘full blood’ Aborigines were forced by law, to live in missions.  Aboriginal people of mixed descent were classed as ‘non-Aboriginal’ and not allowed contact with their parents or other relatives.

In secret and in fear, Aboriginal people would walk the 15 km from Ramahyuck mission, at the mouth of the Avon River, to meet with their relatives at this traditional gathering place.

At this place in 2010 a Native Title Agreement was signed. The determination area covers approximately 45,000 hectares in Gippsland extending from west Gippsland near Warragul, east to the Snowy River, and north to the Great Dividing Range. It also includes 200 metres of offshore sea territory. The determination area includes 10 parks and reserves that are to be jointly managed by the Victorian government and the Gunai/Kurnai people.

Several trees with scars where a sheet of bark has been removed. Canoes, shelters, shields, food bowls and infant carriers could all have been made from carefully removed and prepared bark.

Grinding stones for tool sharpening at the top of the hill.